Many of the homes built in the 1920’s-1960’s in the Hollywood Hills are being torn down to bring modern houses with the most sophisticated & luxurios features found anywhere on the planet. This central location is truly ideal. If you wanted to identify with an absolute central area in relation to the Greater Los Angeles area, then the Hollywood Hills would be it. You will find yourself with the entire city at your fingertips, halfway between Downtown and the beaches and ocean and also dividing the basin (Westside) with the San Fernando Valley (The Valley). The Hollywood Hills, which sprawl along the southern portion of the Santa Monica Mountains homes can go from one extreme of quaint to extravagant. Set atop Sunset Plaza, the famous Sunset strip is just a stone’s throw away with its a famous Comedy Clubs, Hotels, Restaurants and nightlife.  The single or bachelor life is in it’s prime when living in the Hollywood Hills. Runyon Canyon off of Fuller Ave is a large draw for locals & tourists alike whom want to experience hiking to the most magnificent views of Los Angeles, from the ocean to Santa Monica. Prices for homes start north of $750,000 and can reach $20,000,000. The Hollywood Hills & Sunset Strip area is truely unique and can offer some of the best views money can buy in Los Angeles. When they say it has that “million dollar view”, they are talking about the Hollywood Hills. 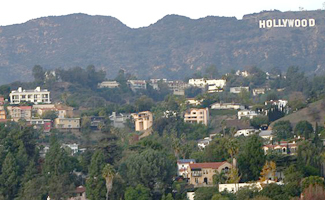 The Hills’ reputation precedes itself with streets lined by rare and innovative architectural gems that adapt the homes to the steep and beautiful hills. Your neighbors are none other than the highest echelons of society and many of them famous celebrities of the entertainment industry which has made its epicenter at the feet of the hills. There are many highly rated schools (including Wonderland Elementary) both within the hills as well as in adjacent, convenient neighborhoods. Portions of Hollywood Hills exists within 90046, 90038, 90048 and 90069 zip codes