Studio City real estate services is just our forte. Named for the movie/tv studio’s that drew people to the area back in the 1920’s. Considered an affluent residential neighborhood within the City of Los Angeles in the San Fernando Valley. The average annual household income in Studio City is $156,142. There are 40,449 residents in Studio City, with a median age of 41.

Only 13 miles northwest of Downtown Los Angeles, Studio City is nestled in the northern foothills the Santa Monica mountains, a prime location for easy access to employment centers in Hollywood, Downtown, the Valley and Beverly Hills. The Ventura Freeway from Los Angeles and the San Diego Freeway from the coastal cities gives easy access to all of Southern California. Studio City is ideally situated for living, working or relaxing in Southern California. Schools include the highly desirable Carpenter Elementary. The stretch of Ventura Boulevard that runs through Studio City is the neighborhood’s primary commercial corridor. Studio City expands over four ZIP code areas: 91604 and sections of 91602, 91607 and 90210. 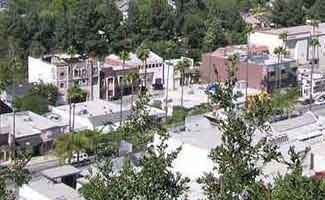 Some fun things to do in Studio City: